In 1992 my friends Metin Seven(Graphics artist) and Ramon Braumuller (Musician) and I were asked to make a game for a TV advertisement for Calve Pindakaas (A big dutch peanut butter brand). In the Ad a kid gets sucked into a television where the game is playing. He there has to dodge enemies and find the hidden peanut butter. At the end when a big phantom makes a dramatic entrance, he is resqued by his girlfriend who was watching everything outside of the TV. The advertisement was a first of it’s kind. It was longer than 1 minute (which was unprecedented in that time), and it featured a real video game. Kids could play the game in the Telekids studio (A dutch kids program) and win their length in peanut butter jars. 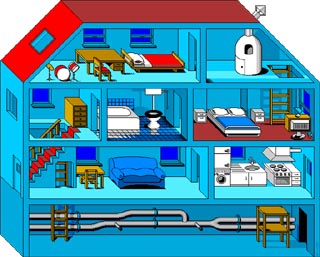