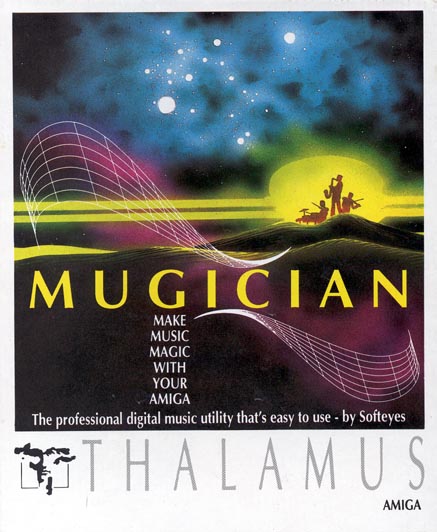 The Digital Mugician is a music sequencer, synthesizer and sampler for the Commodore Amiga. Besided being able to make music with it, it also came with a separate ‘replayroutine’ which someone could integrate in their app or game, and that way have some music in it. We ourselves used it for our game ‘Hoi’ which was released 1 year later.

The music editor was our answer to the upcoming ‘tracker’ genre, only at that time there were not so many yet. Soundtracker (from Karsten Obarski) was the one who had the first one which resembles current day trackers, but we already had SidMon which was based on a ‘tracker’ from the C64 called Soundmon. Mugician was our way to upgrade SidMon to a more mature platform and do what Ultimate tracker could (but better), by also adding the music synthesis from SidMon to it. Both samples and synthetic sounds could be mixed in the same tune. The advantage for the synthetic sounds was primarily to keep the songs really small for when embedding the tune into a game. Songs were created by first designing some sounds, then creating ‘patterns’ which were 64 steps in a measure in which sounds could be places sequentially. Then by combining these patterns in the 4 hardware audio channels the Amiga had, you could create your songs.

A later version of Mugician (which was never released) could play upto 7 voices, by mixing 4 channels into 1 and having the other 3 be normal channels. This taxed the computer to the max and while music like this was playing the computer could do nothing else anymore. It was even so taxing, that the displaymode of the screen could not show more than 16 colors at the same time, or it would steal too many DMA cycles which the replayer needed.